Do you spend hours on retouch?

It might surprise you to learn that the transformation from the left image to the right took less than a minute in Photoshop including the loading and saving of the image! Really I hear you ask, how did you manage that? Around three years ago I went along to a Photovision road show and watched in amazement as one of the seminar presenters took image after image and blindly (literally) retouched them in less than a minute at a time. This included in one instance a complete replacement of the sky, including dealing the the sky reflection in a lake. The presenter was called Guy Gowan and he really did open my eyes to a superb way of processing images that doesn’t take a lot of time, but produces superb results 9 times out of 10.

I won’t reveal his secret sauce, although one of the foundations is detailed in a previous post, but I do urge you to go check out his web site (www.guygowan.com) and have your eyes opened to another way of processing that is straightforward, logical and produces great results in no time at all. Obviously in some instances you will want to take the images further and add textures etc to them to bring out the artistic side, but in 90% of your photographs his techniques will nail you the image you were after.

In a previous post I talked about the quest for the twenty in club competitions. Well sometimes you come up with an idea and invest quite a bit of effort working through only for it to just not click. This image is a reject from an attempt at a splash of colour as I desperately tried to avoid falling into the cliche water drop or colour popped picture. It kind of works, but unfortunately my daughters face just doesn’t have the right expression to make it pop for me. Its an interesting picture, but is it a twenty… probably not, and hence it is languishing here.

I did try and gauge it’s popularity by posting it on Facebook and Flickr, but it wasn’t very conclusive. Ah well next image please.

PS. This is the image that was the cause of the controversy.

Rights, or whoops there goes my image

Earlier this week I had an incident where one of my images was used without permission being sought. So what you might ask, this thing happens all the time, and yes you’re right it does. I’ve found one of my images being used as an avatar for someone I’ve never met let alone heard of on LinkedIn. The image in question in that instance even includes a water mark with my name! It seems an assumption is made over images and other digital media on the Internet, that once they are released they are public domain.

In this new instance, the image was credited to me, which was good, but that still didn’t get away from the fact that image was used without my permission and more importantly taken from my private Facebook page. Maybe I shouldn’t have got upset, but I did because of a number of reasons:

Now I know that you might argue that once an image is on the Internet you lose control of it, and I fully understand that. I just expect my images to appear in unexpected places, aka the LinkedIn avatar, not so close to home.

However, the person has apologised, and I thank them for that. They had made assumptions about the image, which proved to be wrong and I can see where their logic was when they made the choices to use the image.

So as for the image, what to do with it. Not sure, I’ve been advised to submit it for other competitions, and maybe I will once I’ve worked on it a bit more. Will it be the same image by then? Probably not. Will I stumble upon it somewhere else unexpected? Probably in this age of the Internet and the assumption of everything being public domain.

Photoshop puts a really useful tool at your disposal that can automatically change the levels in an image, but most people seem confused by how it works. They’ve read various books and web sites that suggest that one of the first things you should do when starting to edit an image is to apply automatic levels to it and then in dismay they watch the colours in their image shift all over the place only to be left with a crappy looking image. So whats going on? I hear you ask, why has Photoshop decided to shaft all the colours? Well by default it will auto level each of the RGB channels independently rather than applying the levelling to the luminosity of the image.

You can see this effect in the image below where the left hand side has been auto levelled using the per channel method and the right by the monochromatic method. The image on the left has a colour shift towards green giving the skin a green tint, whereas the one on the right doesn’t, maintaining the natural colours in the image (ignore the fact that it was shot with auto white balance etc). So how do you fix this, don’t despair, it is simple to fix this from the levels dialog.

Open the normal levels dialog by clicking on the menu “Image > Adjustments > Levels…“at which point you should see the dialog below.

Click on the “Options” button and you will now see the “Auto Color Correction Options” the following dialog. 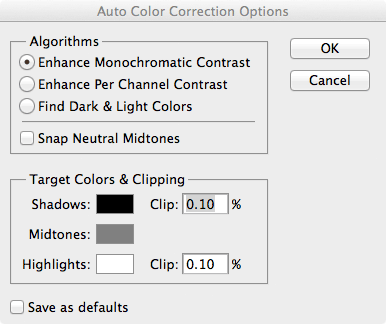 By default this dialog has “Enhance Per Channel Contrast” selected, which as the name suggests performs the auto level operation on each RGB channel independently causing the colour shifts. Select “Enhance Monochromatic Contrast” instead remembering to select the “Save as defaults” checkbox. If you don’t select the checkbox, Photoshop will forget the change! Click on the “OK” button and the “OK” button for the “Levels” dialog.

From now on when you perform an auto levels operation, Photoshop will apply the level operation to the luminosity of the image as a whole and won’t end up colour shifting the image.

I’ve a confession, it’s a dirty secret, I’m a member of a camera club – sorry photographic society. I’d toyed with joining one of the local ones for five years or so, since not long after buying a DSLR and starting the lens addiction. Have I mentioned the lens addiction, shhhh thats another secret for another time. Anyway, every year I decided to join a club it always seemed to be at the end of their season and it didn’t seem worthwhile. Eventually last year I decided to take the plunge and join one. Looking on Google, there seemed to be quite a few local to me so I set off on a voyage of discovery to find out what each one was like. You know that idea you have in the back of your head about how they are full of old men sporting beards and reminiscing over the death of film (have I mentioned the film secret?), well you are quite right, that’s exactly what most of them are like.

Well, thankfully not all. I settled on Stevenage Photographic Society, yeah sounds grande doesn’t it – not like a club at all. You want to know another secret? It’s just a grande name for a club. Anyway, what I like about this society is that it has a wide mix of people, with all ranges and sexes present. It still has a theme of competitions at it’s heart, but it also seems to be responsible and understanding enough to want to help newbies (god I hate that term) to learn the art and techniques of photography.

So competitions, they are the life blood of the clubs and most of the season is wrapped around them. For those of you not in the know, you generally submit 2 to 6 prints or DPIs (that’s digital images) and a recognised judge will mark them out of 20. You might think that getting a 20 for an image means it is the best ever image, but in reality it is just the best in the presented set and could be mullered in another competition.

I’ve garnered a reputation for entering some left field images in the competitions and because of this suffered with the points scored in some of the competitions, but also been surprised by how well some have done. The Spitfire above was my first 20. Is it a good image? I think so, will I enter it elsewhere? Who knows, but at least I got a 20. Maybe I should leave now while the going is good…

And so it begins… 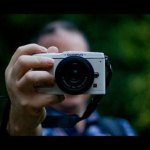 Hopefully, this will continue long enough that it becomes an account of my continuing journey (no captain logs jokes) through photography. I’m planning on capturing things I’ve discovered about taking and processing photography and also my thoughts on things I’ve tripped over. Maybe I’ll drift off in to other topics like Apple or software development (I develop software for the iOS amongst other things!).

The picture you see attached to this entry was taken by a friend Jon Morris-Smith (flickr link) on a Photo Walk organised by Sharon Cooper. It’s one half of a photography stand off that took place in a spooky cemetery with a derelict church looming over us and the light fading fast, or was it us running fast towards the pub 🙂 This half was taken by Jon and is a picture of me, probably the closest thing to a portrait I have of myself at the moment. You can find the other half of the duo of pictures in my flickr stream here “Snapper”. I bet you can’t guess what camera I used.